This data will not be available for:

How does it work?

1. Implement the Branch Android SDK to your mobile app

Please visit our Developers Hub to implement the Branch SDK on Android. If you already have the Android SDK implemented into your mobile app, make sure that it is using 5.0.13+.

In the Facebook App Dashboard under Basic > Settings for your app, scroll down to the Android section. Copy the Install Referrer Decryption Key 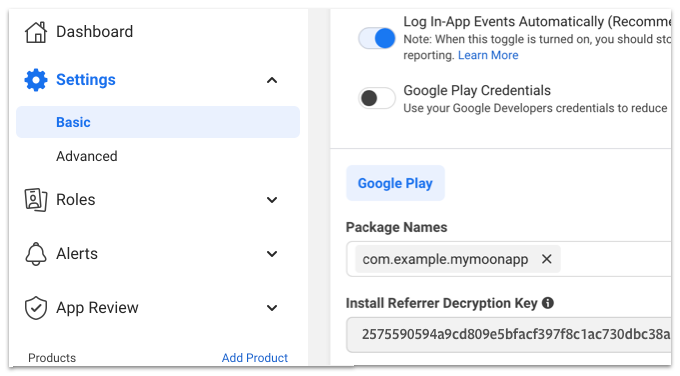 3. Input your key in Branch

In the Branch Dashboard under Ads > Partner Management, find/search for Facebook.
Paste the decryption key from Step 2.

If you're already logged into the Branch Dashboard, you can also click here to go there directly.

Utilize Branch's Exports or Webhooks to look at granular Facebook-attributed data.
Note: You need a live Facebook Android ad campaign running in order for data to properly flow through Branch.

Note: Branch will prioritize Install Referrer data over MMP API data for attribution if both are available.

What events are displayed in log-level data reports and when will this become available?

Only log-level data for installs is displayed in Exports/Webhooks once a valid install referrer decryption key is submitted and an install is attributed to Facebook Ads with Install Referrer data.

Note: If an open or re-install comes with install referrer from Facebook, then it will also be available in the log-level data reports.