Self Attributing Networks - commonly referred to as SANs - are unique in that they have infrastructure to track users & conversions at both the web & app level, so they can attribute downstream user behavior that occurs within their own ecosystem.

As such, SAN attribution is completed independently from a third party attribution provider - like Branch - which receives attribution confirmation directly from the SAN itself. 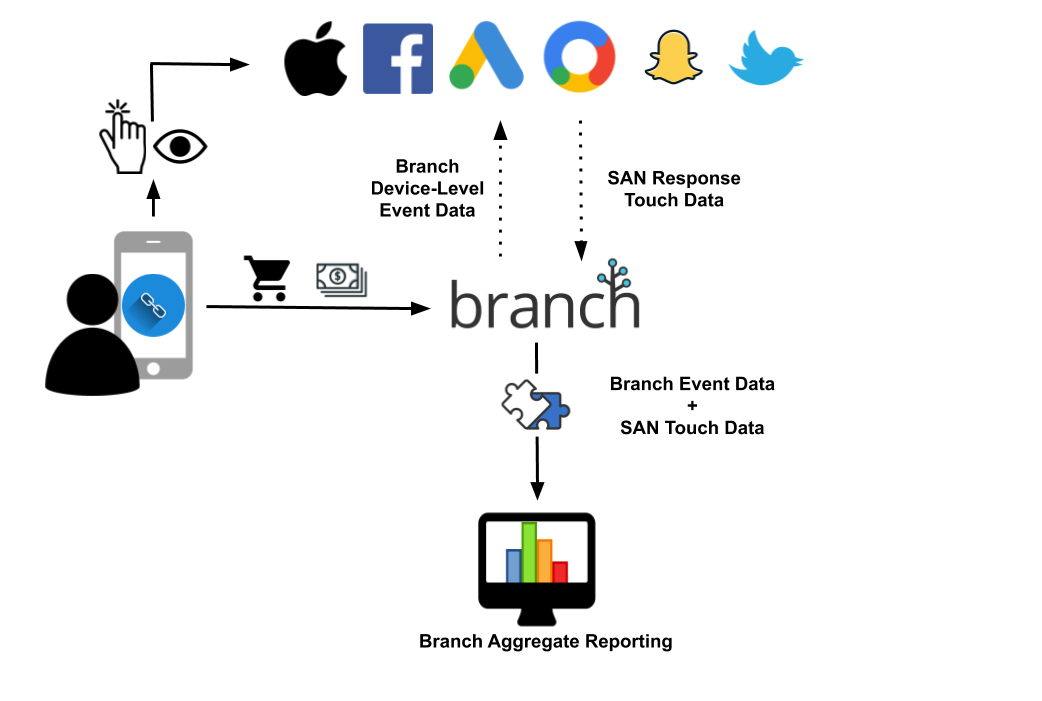 1. User interacts with a SAN mobile ad -> is taken into your app -> completes an in-app event.; e.g. a purchase.
2. The SAN records and ingests the click/impression information associated with the in-app event.
3. Simultaneously, the Branch SDK records the in-app event which is sent to the Branch servers.
4. Branch sends device-level event data to the SAN via API to potentially be claimed by the SAN.
5. If the SAN has touch data that corresponds to the device-level event data, the SAN sends Branch said touch data to use for attribution.
6. Branch joins the SAN touch data with the event data on a per device basis after which the SAN attribution data is aggregated and displayed in your Branch dashboard.

In summary, Branch tracks app conversion events and sends them to the SANs enabled in your dashboard in bulk; the Ad Networks then claim the conversions they want to take credit for.

Branch adds value here by de-duplicating the attribution data across Ad Networks by cross-referencing event data across networks, giving credit based on event timestamps. For example, if Twitter and Facebook were claiming the same event, we’d credit the Ad Network with the last timestamp.

As SANs only have visibility into their own platform, conversion counts tend to be higher in their own reporting UI which is why 3rd party attribution providers like Branch exist.

The following SANs also provide an endpoint for the retrieval of cost data:

For those SANs that send cost data, Branch provides the following metrics:

NOTE: All cost data is ingested in local currency and then translated to USD on the dashboard using the exchange rate for that currency on the day the data is stored. In effect, this means the dashboard shows the amount that campaign cost converted to USD at the time it ran.

For those Self Attributing Networks that allow the use of 3rd party links in APP AD CAMPAIGNS, the Branch link you provide can only be used for deep linking and not for attribution.

To ensure this, add $deeplink_no_attribution=true as a query parameter to the ad link you have created. Not doing so will cause any conversions resulting from said link to not be attributed.

For non-app ad campaigns - i.e. WEB CAMPAIGNS - you do not need to modify the Branch-generated link.

Failure to append the campaign name with the Agency ID will result in any subsequent conversion not being properly attributed to the responsible agency.

You can find your Agency ID under Account Settings in the Agency view.

Your agency tag must adhere to the following format:

You can append the Agency Tag to either the beginning or the end of the campaign name.

Each SAN has its own requirements on how their attribution data can be handled by a third party. To learn the specifics for each SAN, please refer to the following: